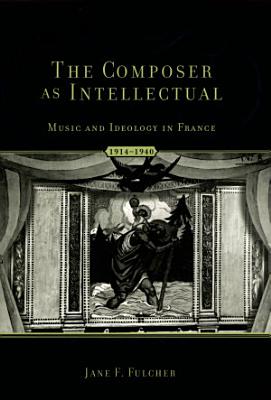 In The Composer as Intellectual, musicologist Jane Fulcher reveals the extent to which leading French composers between the World Wars were not only aware of but also engaged intellectually and creatively with the central political and ideological issues of the period. Employing recent sociological and historical insights, she demonstrates the extent to which composers, particularly those in Paris since the Dreyfus Affair, considered themselves and were considered to be intellectuals, and interacted closely with intellectuals in other fields. Their consciousness raised by the First World War and the xenophobic nationalism of official culture, some joined parties or movements, allying themselves with and propagating different sets of cultural and political-social goals. Fulcher shows how these composers furthered their ideals through the specific language and means of their art, rejecting the dominant cultural exclusions or constraints of conservative postwar institutions and creatively translating their cultural values into terms of form and style. This was not only the case with Debussy in wartime, but with Ravel in the twenties, when he became a socialist and unequivocally refused to espouse a narrow, exclusionary nationalism. It was also the case with the group called "Les Six," who responded culturally in the twenties and then politically in the thirties, when most of them supported the programs of the Popular Front. Others could not be enthusiastic about the latter and, largely excluded from official culture, sought out more compatible movements or returned to the Catholic Church. Like many French Catholics, they faced the crisis of Catholicism in the thirties when the church not only supported Franco, but Mussolini's imperialistic aggression in Ethiopia. While Poulenc embraced traditional Catholicism, Messiaen turned to more progressive Catholic movements that embraced modern art and insisted that religion must cross national and racial boundaries. Fulcher demonstrates how closely music had become a field of clashing ideologies in this period. She shows also how certain French composers responded, and how their responses influenced specific aspects of their professional and stylistic development. She thus argues that, from this perspective, we can not only better understand specific aspects of the stylistic evolution of these composers, but also perceive the role that their art played in the ideological battles and in heightening cultural-political awareness of their time.

The Composer As Intellectual

Authors: Jane F. Fulcher
Categories: Political Science
In The Composer as Intellectual, musicologist Jane Fulcher reveals the extent to which leading French composers between the World Wars were not only aware of bu

The Composer As Intellectual

Authors: Jane F. Fulcher
Categories: History
Their consciousness raised by the First World War and the xenophobic nationalism of official culture, some joined parties or movements, allying themselves with

The Composer on Screen

Authors: Paul Fryer
Categories: Performing Arts
﻿ This collection of new essays explores the many ways in which composers have been depicted in film and what audiences have taken away from such depictions.

Authors: Mark Carroll
Categories: Music
This volume gathers together a cross-section of essays and book chapters dealing with the ways in which musicians and their music have been pressed into the ser

The Game Composer's Guide to Survival

Authors: Michael L Pummell
Categories: Computers
Targeted to anyone considering a career as an interactive composer, you’ll learn if you truly have the talent, or if your college simply emptied your wallet.

Authors: Erich Leinsdorf
Categories: Performing Arts
An eminent conductor's theories on musical training--musicians should read full scores and be familiar with the musical conventions and cultural milieu of the c