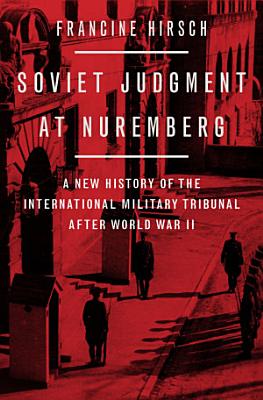 "Soviet Judgment at Nuremberg reveals the pivotal role the Soviet Union played in the Nuremberg Trials of 1945 and 1946. The Nuremberg Trials (IMT), most notable for their aim to bring perpetrators of Nazi war crimes to justice in the wake of World War II, paved the way for global conversations about genocide, justice, and human rights that continue to this day. As Francine Hirsch reveals in this new history of the trials, a central part of the story has been ignored or forgotten: the critical role the Soviet Union played in making them happen in the first place. While there were practical reasons for this omission--until recently, critical Soviet documents about Nuremberg were buried in the former Soviet archives, and even Russian researchers had limited access--Hirsch shows that there were political reasons as well. The Soviet Union was regarded by its wartime Allies not just as a fellow victor but a rival, and it was not in the interests of the Western powers to highlight the Soviet contribution to postwar justice"--

The Violations of Human Rights in Soviet Occupied Lithuania

The Current Digest of the Soviet Press

Behind the Soviet Screen