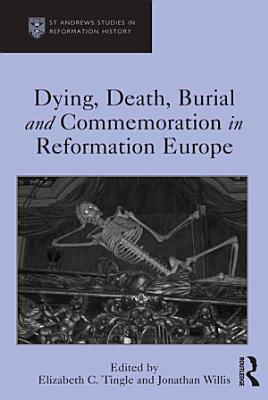 In recent years, the rituals and beliefs associated with the end of life and the commemoration of the dead have increasingly been identified as of critical importance in understanding the social and cultural impact of the Reformation. The associated processes of dying, death and burial inevitably generated heightened emotion and a strong concern for religious propriety: the ways in which funerary customs were accepted, rejected, modified and contested can therefore grant us a powerful insight into the religious and social mindset of individuals, communities, Churches and even nation states in the post-reformation period. This collection provides an historiographical overview of recent work on dying, death and burial in Reformation and Counter-Reformation Europe and draws together ten essays from historians, literary scholars, musicologists and others working at the cutting edge of research in this area. As well as an interdisciplinary perspective, it also offers a broad geographical and confessional context, ranging across Catholic and Protestant Europe, from Scotland, England and the Holy Roman Empire to France, Spain and Ireland. The essays update and augment the body of literature on dying, death and disposal with recent case studies, pointing to future directions in the field. The volume is organised so that its contents move dynamically across the rites of passage, from dying to death, burial and the afterlife. The importance of spiritual care and preparation of the dying is one theme that emerges from this work, extending our knowledge of Catholic ars moriendi into Protestant Britain. Mourning and commemoration; the fate of the soul and its post-mortem management; the political uses of the dead and their resting places, emerge as further prominent themes in this new research. Providing contrasts and comparisons across different European regions and across Catholic and Protestant regions, the collection contributes to and extends the existing literature on this important historiographical theme.

Authors: Elizabeth C. Tingle
Categories: History
In recent years, the rituals and beliefs associated with the end of life and the commemoration of the dead have increasingly been identified as of critical impo

Folds of Past, Present and Future

Authors: Sarah Van Ruyskensvelde
Categories: History
This volume brings together important theoretical and methodological issues currently being debated in the field of history of education. The contributions shed

Authors: Georgina Byrne
Categories: History
Shows how some of the ideas about the afterlife presented by spiritualism helped to shape popular Christianity in the period.

At Home in the Eighteenth Century

Authors: Stephen G. Hague
Categories: History
The eighteenth-century home, in terms of its structure, design, function, and furnishing, was a site of transformation – of spaces, identities, and practices.

Authors: Avner Wishnitzer
Categories: History
In a world that is constantly awake, illuminated and exposed, there is much to gain from looking into the darkness of times past. This fascinating and vivid pic

Authors: Katie Barclay
Categories: History
Caritas, a form of grace that turned our love for our neighbour into a spiritual practice, was expected of all early modern Christians, and corresponded with a

Religion, the Supernatural and Visual Culture in Early Modern Europe

Authors: Jennifer Spinks
Categories: History
This volume brings together some of the most exciting current scholarship on these themes. This interdisciplinary and geographically broad-ranging volume pays t