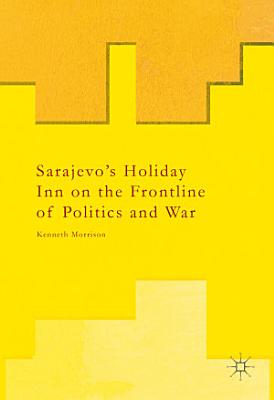 Sarajevo’s Holiday Inn on the Frontline of Politics and War charts the rich history of the city’s famous Holiday Inn hotel. Describing in detail the tumultuous events that took place within its walls and in its immediate environs, this book explores the opening of the building in advance of the 1984 Winter Olympics through the early 1990s when the hotel was utilized by political elites through to the siege of Sarajevo, when the hotel became the main base for foreign correspondents. Kenneth Morrison draws upon a plethora of primary and secondary sources, and includes extensive interviews with many participants in the drama that was played out within the confines of the hotel, contextualizing the case of the Holiday Inn by analyzing how hotels are utilized in times of conflict.

Sarajevo’s Holiday Inn on the Frontline of Politics and War

Reporting the Siege of Sarajevo

Authors: Kenneth Morrison
Categories: History
The Siege of Sarajevo remains the longest siege in modern European history, lasting three times longer than the Battle of Stalingrad and over a year longer than

Political, Social and Religious Studies of the Balkans

Authors: General Editor: Raphael Israeli, Jerusalem, Israel
Categories: Political Science
Since the end of the Bosnia War in 1995, a tradition was embraced by the West of vilifying the Serbs as the villains, and the Muslims as their victims. This nec

A Cultural History of the 1984 Winter Olympics

Authors: Zlatko Jovanovic
Categories: History
This book examines the 1984 Sarajevo Winter Olympic Games. It tells the story of the extensive infrastructural transformation of the city and its changing globa

The Politics of Football in Yugoslavia

Authors: Dario Brentin
Categories: Sports & Recreation
The history of sport in socialist Yugoslavia is a peculiar lens through which to examine the country’s social, cultural and political transformations. Sport i

Authors: Adam Moore
Categories: Political Science
In a dramatic unveiling of the little-known world of contracted military logistics, Adam Moore examines the lives of the global army of laborers who support US