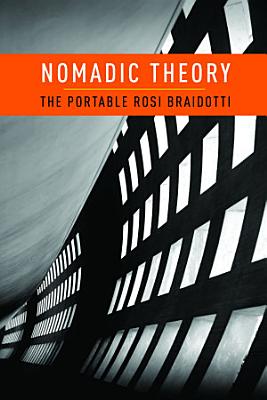 Rosi Braidotti's nomadic theory outlines a sustainable modern subjectivity as one in flux, never opposed to a dominant hierarchy yet intrinsically other, always in the process of becoming, and perpetually engaged in dynamic power relations both creative and restrictive. Nomadic theory offers an original and powerful alternative for scholars working in cultural and social criticism and has, over the past decade, crept into continental philosophy, queer theory, and feminist, postcolonial, techno-science, media, and race studies, as well as into architecture, history, and anthropology. This collection provides a core introduction to Braidotti's nomadic theory and its innovative formulations, which playfully engage with Deleuze, Foucault, Irigaray, and a host of political and cultural issues. Arranged thematically, essays begin with such concepts as sexual difference and embodied subjectivity and follow with explorations in technoscience, feminism, postsecular citizenship, and the politics of affirmation. Braidotti develops a distinctly positive critical theory that rejuvenates the experience of political scholarship. Inspired yet not confined by Deleuzian vitalism, with its commitment to the ontology of flows, networks, and dynamic transformations, she emphasizes affects, imagination, and creativity and the politics of radical immanence. Incorporating ideas from Nietzsche and Spinoza as well, Braidotti establishes a critical-theoretical framework equal parts critique and creation. Ever mindful of the perils of defining difference in terms of denigration and the related tendency to subordinate sexualized, racialized, and naturalized others, she explores the eco-philosophical implications of nomadic theory, feminism, and the irreducibility of sexual difference and sexuality. Her dialogue with technoscience is crucial to nomadic theory, which deterritorializes the established understanding of what counts as human, along with our relationship to animals, the environment, and changing notions of materialism. Keeping her distance from the near-obsessive focus on vulnerability, trauma, and melancholia in contemporary political thought, Braidotti promotes a politics of affirmation that has the potential to become its own generative life force.

Critical Theory at a Crossroads

Authors: Stijn De Cauwer
Categories: Philosophy
We are living in an age of crisis—or an age in which everything is labeled a crisis. Financial, debt, and refugee “crises” have erupted. The word has also

Posthumanism and the Digital University

Authors: Lesley Gourlay
Categories: Language Arts & Disciplines
It is a commonplace in educational policy and theory to claim that digital technology has 'transformed' the university, the nature of learning and even the esse

Authors: Tara Fenwick
Categories: Education
Actor-network theory (ANT) is enjoying a notable surge of interest in educational research. New directions and questions are emerging along with new empirical a

Promises, Pedagogy and Pitfalls: Empathy’s Potential for Healing and Harm

Authors: Pam Morrison
Categories: Social Science
This volume explores empathy’s potential for healing and harm, and its potency to effect change for good or ill, at inter-personal, ecological and global leve

Authors: Rosi Braidotti
Categories: Philosophy
How might we reinvent the humanities? This is the question at the heart of this provocative volume. It is a difficult mission and definitely one which needs to