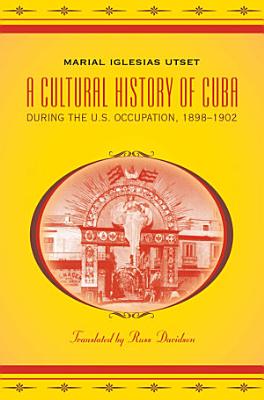 In this cultural history of Cuba during the United States' brief but influential occupation from 1898 to 1902--a key transitional period following the Spanish-American War--Marial Iglesias Utset sheds light on the complex set of pressures that guided the formation and production of a burgeoning Cuban nationalism. Drawing on archival and published sources, Iglesias illustrates the process by which Cubans maintained and created their own culturally relevant national symbols in the face of the U.S. occupation. Tracing Cuba's efforts to modernize in conjunction with plans by U.S. officials to shape the process, Iglesias analyzes, among other things, the influence of the English language on Spanish usage; the imposition of North American holidays, such as Thanksgiving, in place of traditional Cuban celebrations; the transformation of Havana into a new metropolis; and the development of patriotic symbols, including the Cuban flag, songs, monuments, and ceremonies. Iglesias argues that the Cuban response to U.S. imperialism, though largely critical, indeed involved elements of reliance, accommodation, and welcome. Above all, Iglesias argues, Cubans engaged the Americans on multiple levels, and her work demonstrates how their ambiguous responses to the U.S. occupation shaped the cultural transformation that gave rise to a new Cuban nationalism.

Authors: Marial Iglesias Utset
Categories: History
In this cultural history of Cuba during the United States' brief but influential occupation from 1898 to 1902--a key transitional period following the Spanish-A

Authors: Henry Louis Gates, Jr.
Categories: History
12.5 million Africans were shipped to the New World during the Middle Passage. While just over 11.0 million survived the arduous journey, only about 450,000 of

Authors: Nari Shelekpayev
Categories: History
This book brings together a series of papers presented at a University of Montreal interdisciplinary conference held in March 2014 and devoted to various little

Cuba, the United States, and the Culture of the Transnational Left, 1933-1970

Authors: John A. Gronbeck-Tedesco
Categories: History
This book examines the ways in which Cuba's revolutions of 1933 and 1959 became touchstones for border-crossing endeavors of radical politics and cultural exper

Authors: Megan Feeney
Categories: History
From the turn of the twentieth century through the late 1950s, Havana was a locus for American movie stars, with glamorous visitors including Errol Flynn, John

Authors: Alejandro L. Madrid
Categories: Music
Initially branching out of the European contradance tradition, the danzón first emerged as a distinct form of music and dance among black performers in ninetee

Authors: Rebecca J. Scott
Categories: History
"As Louisiana and Cuba emerged from slavery in the late nineteenth century, each faced the question of what rights former slaves could claim. Degrees of Freedom

Authors: David Sartorius
Categories: History
Known for much of the nineteenth century as "the ever-faithful isle," Cuba did not earn its independence from Spain until 1898, long after most American colonie