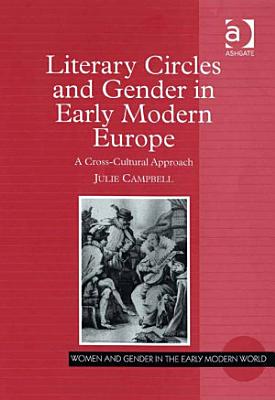 A comparative analysis, this study examines the interactions of early modern male and female writers within the context of literary circles. In particular, Campbell examines how the querelle des femmes as a discursive rhetorical tradition of praise and blame influenced perceptions of well-educated women who were part of literary circles in Italy, France, and England from approximately 1530 to 1650. To gain a better sense of how querelle language and issues were used for or against learned women writers, Campbell aligns selected works by female and male writers, pairing them to analyze how the woman writer responds, deflects, or rewrites the male writer's ideological script on women. She focuses first on the courtesan Tullia d'Aragona's response in her Dialogo della infinità di amore to Sperone Speroni's Dialogo di amore, and contrasts the actress/writer Isabella Andreini's pastoral La Mirtilla with Torquato Tasso's Aminta. She then discusses the influence of Italian actresses upon the manners and mores of French women of the Valois court, especially focusing on performative aspects of French women's participation in court and salon rituals. To that end, she examines the influential salon of the aristocratic, learned Claude-Catherine de Clermont, duchesse de Retz, who encouraged the writing of positive querelle rhetoric in the form of Petrarchan, Neoplatonic encomiastic poetry to buttress her reputation and that of her female friends. Next, Campbell reads Louise Labé's Débat de Folie et d'Amour against Pontus de Tyard's Solitaire premier to illustrate the tensions between a traditional and nontraditional querelle stance. She then discusses Continental influence upon English writers in the context of the Sidney circle in England. Moving to the closet dramas of the Sidney circle, Campbell examines the solidarity these writers demonstrated with nontraditional stances on querelle issues, and, finally, she explores how three generations of English literary circles contested querelle issues in her discussion of Philip Sidney's Arcadia, Mary Wroth's Urania, and Anna Weamys's Continuation of the Arcadia. Campbell's analysis of how the confrontation between querelle issues and the new figure of the learned woman engendered friction across national, cultural and gender boundaries enables us to understand more fully the intertextual connections between differing national literatures of the period. Ultimately, this study provides new perspectives on the production of the texts under consideration, as well as paradigms for approaching other texts from the period.

Authors: Julie Campbell
Categories: Literary Criticism
A comparative analysis, this study examines the interactions of early modern male and female writers within the context of literary circles. In particular, Camp

Authors: Julie Campbell
Categories: European literature
A comparative analysis, this study examines the interactions of early modern male and female writers within the context of literary circles. In particular, Camp

Authors: Jane Couchman
Categories: Literary Criticism
Over the past three decades scholars have transformed the study of women and gender in early modern Europe. This Ashgate Research Companion presents an authorit

The Politics of Female Households: Ladies-in-waiting across Early Modern Europe

Authors:
Categories: Social Science
This multi-disciplinary collection of essays is the first cohesive attempt to integrate ladies-in-waiting into the master narrative of court studies. It provide

Authors: Bronwen Wilson
Categories: History
The book looks at how people, things, and new forms of knowledge created "publics" in early modern Europe, and how publics changed the shape of early modern soc

Laura Battiferra and Her Literary Circle

Women's Literacy in Early Modern Spain and the New World