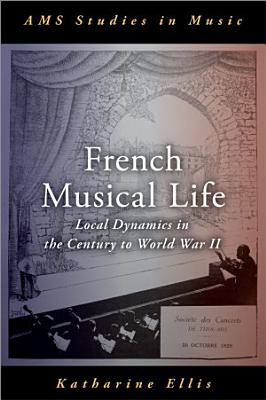 Explicitly or not, the historical musicology of post-Revolutionary France has focused on Paris as a proxy for the rest of the country. This distorting lens is the legacy of political and cultural struggle during the long nineteenth century, indicating a French Revolution unresolved both then and now. In light of the capital's power as the seat of a centralizing French state (which provincials found 'colonizing') and as a cosmopolitan musical crossroads of nineteenth-century Europe, the struggles inherent in creating sustainable musical cultures outside Paris, and in composing local and regionalist music, are ripe for analysis. Replacement of 'France' with Paris has encouraged normative history-writing articulated by the capital's opera and concert life. Regional practices have been ignored, disparaged or treated piecemeal. This book is a study of French musical centralization and its discontents during the period leading up to and beyond the "provincial awakening" of the Belle Époque. The book explains how different kinds of artistic decentralization and regionalism were hard won (or not) across a politically turbulent century from the 1830s to World War II. In doing so it redraws the historical map of musical power relations in mainland France. Based on work in over 70 archives, chapters on conservatoires, concert life, stage music, folk music and composition reveal how tensions of State and locality played out differently depending on the structures and funding mechanisms in place, the musical priorities of different communities, and the presence or absence of galvanizing musicians. Progressively, the book shifts from musical contexts to musical content, exploring the pressure point of folk music and its translation into "local color" for officials who perpetually feared national division. Control over composition on the one hand, and the emotional intensity of folk-based musical experience on the other, emerges as a matter of consistent official praxis. In terms of "French music" and its compositional styles, what results is a surprising new historiography of French neoclassicism, bound into and growing out of a study of diversity and its limits in daily musical life.

Authors: Katharine Ellis
Categories: Music
Explicitly or not, the historical musicology of post-Revolutionary France has focused on Paris as a proxy for the rest of the country. This distorting lens is t

Authors: William Weber
Categories: History
A bold application of the concept of "canonical" works to the development of French operatic and concert life in the eighteenth and nineteenth centuries.

Authors: Peter Woetmann Christoffersen
Categories: Music
A description, reconstruction and discussion of the repertory of an exceptional musical source, the French manuscript made at Lyons c. 1520-1525 as the private

The Musical Legacy of Wartime France

Authors: Leslie A. Sprout
Categories: Music
For the forces competing for political authority in France during Word War II, music became the site of a cultural battle that reflected the war itself. In this

The Harvard Dictionary of Music

Authors: Pamela M. Potter
Categories: Music
A collection of essays examining the roles played by music in American and European society during the Second World War. Global conflicts of the twentieth centu