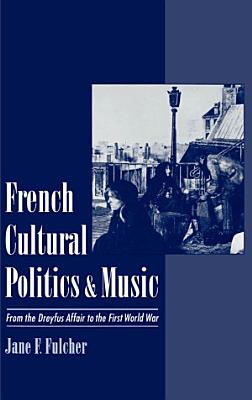 This book draws upon both musicology and cultural history to argue that French musical meanings and values from 1898 to 1914 are best explained not in terms of contemporary artistic movements but of the political culture. During these years, France was undergoing many subtle yet profound political changes. Nationalist leagues forged new modes of political activity, as Jane F. Fulcher details in this important study, and thus the whole playing field of political action was enlarged. Investigating this transitional period in light of several recent insights in the areas of French history, sociology, political anthropology, and literary theory, Fulcher shows how the new departures in cultural politics affected not only literature and the visual arts but also music. Having lost the battle of the Dreyfus affair (legally, at least), the nationalists set their sights on the art world, for they considered France's artistic achievements the ideal means for furthering their conception of "French identity." French Cultural Politics and Music: From the Dreyfus Affair to the First World War illustrates the ways in which the nationalists effectively targeted the music world for this purpose, employing critics, educational institutions, concert series, and lectures to disseminate their values by way of public and private discourses on French music. Fulcher then demonstrates how both the Republic and far Left responded to this challenge, using programs and institutions of their own to launch counterdiscourses on contemporary musical values. Perhaps most importantly, this book fully explores the widespread influence of this politicized musical culture on such composers as d'Indy, Charpentier, Magnard, Debussy, and Satie. By viewing this fertile cultural milieu of clashing sociopolitical convictions against the broader background of aesthetic rivalry and opposition, this work addresses the changing notions of "tradition" in music--and of modernism itself. As Fulcher points out, it was the traditionalist faction, not the Impressionist one, that eventually triumphed in the French musical realm, as witnessed by their "defeat" of Stravinsky's Rite of Spring.

Authors: Jane F. Fulcher
Categories: History
This book draws upon both musicology and cultural history to argue that French musical meanings and values from 1898 to 1914 are best explained not in terms of

Music and the Elusive Revolution

Authors: Eric Drott
Categories: Music
In May 1968, France teetered on the brink of revolution as a series of student protests spiraled into the largest general strike the country has ever known. In

The Politics of Musical Identity

Authors: Annegret Fauser
Categories: Music
This volume explores the way in which composers, performers, and critics shaped individual and collective identities in music from Europe and the United States

The Oxford Handbook of the New Cultural History of Music

Authors: Jane F. Fulcher
Categories: History
This volume demonstrates a new approach to cultural history, as it now being practiced by both historians and musicologists, and the field's quest to grasp the

Authors: Rebecca P. Scales
Categories: History
In December 1921, France broadcast its first public radio program from a transmitter on the Eiffel Tower. In the decade that followed, radio evolved into a mass

Interpreting the Musical Past : Early Music in Nineteenth-Century France

Authors: University of London Katharine Ellis Reader in Music Royal Holloway
Categories: Music
This study of the French early music revival gives us a vivid sense of how music's cultural meanings were contested in the nineteenth century. It surveys the ma

Authors: Mark Carroll
Categories: Music
This volume gathers together a cross-section of essays and book chapters dealing with the ways in which musicians and their music have been pressed into the ser

Authors: Ilyana Karthas
Categories: Performing Arts
For centuries before the 1789 revolution, ballet was a source of great cultural pride for France, but by the twentieth century the art form had deteriorated alo