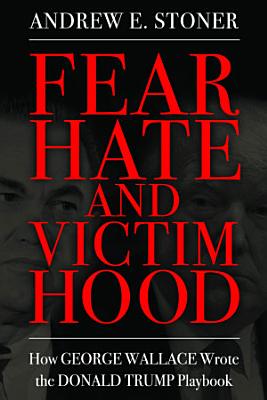 When Donald Trump announced his campaign for president in 2015, journalists, historians, and politicians alike attempted to compare his candidacy to that of Governor George Wallace. Like Trump, Wallace, who launched four presidential campaigns between 1964 and 1976, utilized rhetoric based in resentment, nationalism, and anger to sway and eventually captivate voters among America’s white majority. Though separated by almost half a century, the campaigns of both Wallace and Trump broke new grounds for political partisanship and divisiveness. In Fear, Hate, and Victimhood: How George Wallace Wrote the Donald Trump Playbook, author Andrew E. Stoner conducts a deep analysis of the two candidates, their campaigns, and their speeches and activities, as well as their coverage by the media, through the lens of demagogic rhetoric. Though past work on Wallace argues conventional politics overcame the candidate, Stoner makes the case that Wallace may in fact be a prelude to the more successful Trump campaign. Stoner considers how ideas about “in-group” and “out-group” mentalities operate in politics, how anti-establishment views permeate much of the rhetoric in question, and how expressions of victimhood often paradoxically characterize the language of a leader praised for “telling it like it is.” He also examines the role of political spectacle in each candidate’s campaigns, exploring how media struggles to respond to—let alone document—demagogic rhetoric. Ultimately, the author suggests that the Trump presidency can be understood as an actualized version of the Wallace presidency that never was. Though vast differences exist, the demagogic positioning of both men provides a framework to dissect these times—and perhaps a valuable warning about what is possible in our highly digitized information society.

Authors: Andrew E. Stoner
Categories: Language Arts & Disciplines
When Donald Trump announced his campaign for president in 2015, journalists, historians, and politicians alike attempted to compare his candidacy to that of Gov

The New Faces of Victimhood

A Nation of Haters and Victims

Authors: Ruth E. Todd
Categories: Social Science
The truth does not just set us free; it will keep us free. In A Nation of Haters and Victims, author Ruth E. Todd demonstrates the importance of seeking the tru

Imagining the Victim of Crime

Authors: Sandra Walklate
Categories: Law
"...the clarity in which the wide range of relevant issues are presented throughout the book makes this must-reading for new entrants to this field and for stud

Born for a Reason

Authors: Carolee Johnson MH ND
Categories: Self-Help
You can achieve your highest goals in health and abundance. When you become free of any thought that limits you, then you are unlimited in your ability to creat

The Violence of Victimhood

Authors: Diane Enns
Categories: Social Science
We know that violence breeds violence. We need look no further than the wars in the western Balkans, the genocide in Rwanda, or the ongoing crisis in Israel and

Authors: Owen Ifill
Categories: Fiction
“You have come,” he said, and I knew there and then that I was home. I never went back to my father’s house, and he never came to look for me. And I knew